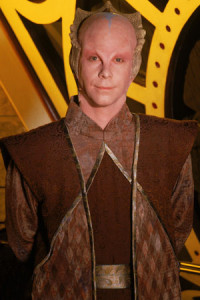 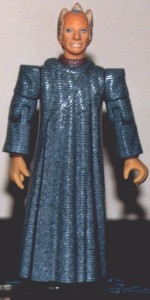 For the body I used the body from the Data as a Romulan figure. I had an extra Captain Picard head laying around so I used it for the Minbari head. I used Milliput for the bone on the back of the head and painted it for the bone look. It took me a long time to get the shading right in the cracks of the bone to make it look correct. I used a little milliput for the ridge on the nose and over the eyes. I cut the ears off and trimmed them down some to make them smaller, then I glued them lower down under the edge of the bone. After a little bit of blue paint on the top of the head and some skin color touch ups, it was finished.